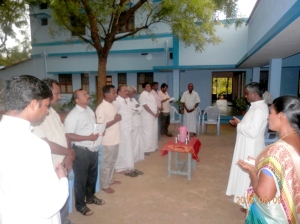 Sivagangai  – The Yesuvanam community hosted a GLM meeting on August 9th. To begin, those present gave honor to Dr. APJ Abdulkalam on the one month anniversary of his death. The family of Mr. Selvaraj was also invited to console them and pray that his soul may rest in peace. The official meeting was started with prayer by Fr. Superior. The GLM discussed the election of officers, the upcoming visit to Cuddalore with the Guanellian Family and how to help at the camp which was held on August 15th at Yesuvanam. Appa Thainas was elected president of the GLM. To pay homage to Mr. Selvaraj, silence was kept for five minutes. The meeting concluded with prayer.