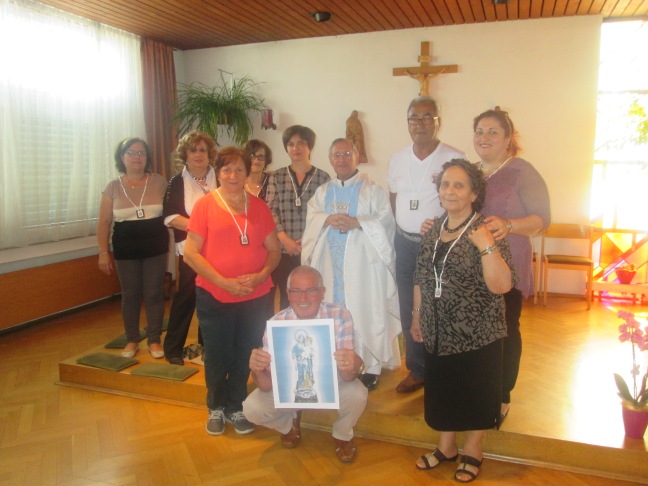 Fr. Guanella first dreamed of beginning his charity march northward into German speaking Grison (the easternmost canton in Switzerland), but for him, the Alpine barrier was too narrow. He dreamed of other ways for his daughters and sons to expand, and in 1903, went on a pilgrimage to Damas, Palestine, showing us the way to Asia. Then in 1912 he came to Germany, and shortly after that blessed visit, he journeyed to the United States in 1913 to visit the Italian immigrants who were there asking for help. In a certain way, he had drawn a master itinerary for where his missionaries needed to move and establish new shelters of charity!
According to his letters published in the Divine Providence Newsletter of Sept. 1912,  he was invited to participate in the International Marian Congress, held in the former capital of the Western Roman Empire. At the end of his intervention he addressed the assembly of Marianists, and implored his Patroness, Holy Mary of Providence, to channel a generous flow of funds to his numerous institutions, celebrating them during the days the Silver Jubilée. This was a clear revelation of his German Dream, dreamed since the first years of his priesthood, and looking northward from his native Alps. During that stay he visited the Cathedral where the Empress Helena brought the Tunic of Jesus in 312 C.E., which also contains splinters from the Holy Cross. He then visited the birth place of St. Ambrose, the Porta Nigra (city gate), and many first Christian churches.
His dream started to become reality, exactly five years after his physical presence on German soil, on January 20, 1917. His brilliant inspiration of the Prayer Chain for a Good Death arrived in the former German region of Alsace. The present German Pious Union of St. Joseph Confraternity moved in January 1920 to the Black Forest, and from there it expanded into neighboring countries. Because of its continuous growth, the St. Joseph Daughters became the hidden hand of Holy Providence during the slow march of the former Guanellian alumni into Germany.
From the St. Trudpert Abbey, our Procure is still receiving generous donations for the new Good Samaritan Pharmacy at our disability center in Manila. Sister Bernita has also entirely financed the printing of our first German biography of Fr. Guanella. Since the arrival of our confreres at Pforzheim in 2014, we began searching for aspirants among both ethnicities in order to stick with our expansion efforts elsewhere in Germany. The selection of collaborators to become friends of the Guanellian family always takes place at Guanellian House, the Lombardos home. This photograph shows the promising members of our newly founded German Guanellian Lay Movement, (GLM), under a German flag and the laughing eyes of our Founder. On July 16th a group of eleven aspirants of the GLM received the devotional scapular of our Lady of Mount Carmel in the small Italian community of Friolzheim.
Our daily work here has concentrated on reactivating old contacts. We have received no further projects from our DPP Missions in India/Philippines, but we can only help others if we receive projects for submission. When that happens, attentive follow-up will occur through our generous Catholic solidarity agencies like Missio/Munich and Kindermision/Aachen.
As we approach the Assumption of the Blessed Virgin, I am reminded that Nov. 1, 1950 was an unforgettable day for me as an altarboy taking part in a unique procession behind the gestatorial chair of Pope Pius XII in front of a half million believers in St. Peter‘s Square. The celebration was an appeal for peace following the destruction of WWII.
May God’s Protection, implored by our Patroness and our Saints, Louis and Clara, accompany all of us, and reinforce our spirit and hearts for a new loving charity season! Remain blessed, and remember that we are here, waiting with confidence for any future requests.
Gero Lombardo Guanellian German Procure