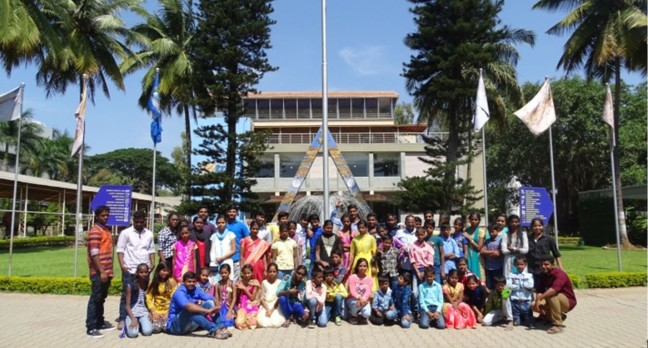 Bangalore – Don Guanella Oratory children went on an educational tour on October 28th. These slum children were so excited to go on a tour; they boarded the bus smiling. The first stop was “HAL Aerospace museum”. The guide explained to the children about the growth and achievements of the institute, “Hindustan Aeronautic Limited” which began in 1940. She passionately shared how it has supplied the nation with many defense planes, helicopters and machinery. The children learned about the evolution of flight and they received knowledge and pride. The audio visual about how each flight served the nation in various ages and sectors was inspirational and exciting. The next stop was to see for themselves the different types of flights and helicopters. Next they visited “Jawaharlal Nehru Planetarium”. The children were thrilled and excited by the galaxies of stars in 3D vision. They learned many things about the galaxy and planet earth. After lunch they were taken to the Aquarium, where varieties of fish were kept for admiration and knowledge. The last stop was for free rides for the children at Cubbon Park. Being fully exhausted from the games, rides and the tour which ended at dusk, they returned cherishing evening snacks while dancing playfully on the bus. We give thanks to God the Almighty for this wonderful outing.