For five years the eyes of the civil and especially the Christian world have been on a tormented country, where an infamous genocide is perpetrated while the Great Policy dispute for a ridiculous cease fire that only lasted a couple of hours continues. We Christians watch the events through the window, and we do not move a single finger! This is the sad reality which the Patriarch of about 4 million Melchite Catholics in Syria, Palestine, Lebanon and Iraq is condemning in his desperate appeals to the remaining people of good will in Western Christianity. In his recent Christmas letter addressed also to our German Entity, he pointed out an often forgotten step of our history: Jesus was born in Bethlehem, Palestine; but Christianity was born and raised in Syria.
I have personally visited that region many times while acting as export manager of my former company. During that time I had many contacts in the capital, Damas, Aleppo and in the neighboring Lebanese Beka Valley, now the biggest refugee camp after that in TR. Through these former business partners we started a risky effort to bring substantial help to these stranded Christians. In fact after first our personal meeting with Patriarch Gregory in Munich in July 2010 in cooperation with the Knights of St. Lazarus of Prior, Mr. Folker Theis, former chaplain of this order, we collected medical equipment for the Catholic Hosptial at Khabab near Damas. Unfortunately was damaged by the war and reconstructed later on with generous help of Melchite Communities in Germany, Austria and also Catholics of Poland. The most efficient contribution of the German Guanellian laity was coordinated by our first councillor Dr. Helmut Müller and hospitals of the German Pious Union at Münstertal. Containers arrived in Damas via our friends in Lattakia, Syria and Beirut, Lebanon. This has been a fulgent Morning Star, a hidden path to Syria of our fledgling German Procure.
We recently sent an invitation to His Beatitude Gregory III, to visit our Guanellian entities in Pforzheim and Tiefenbronn in order to further develop solidarity programs for Syria. “Guanellian engagement” in Middle East is an inspired effort found hidden in Father Guanella’s personal journey to Palestine and Damas in 1902! He was the real designer of our path around the globe. Why did he visit Treviri in 1912? Why at the end of his tireless earthly life did he visit the USA? I guess he was able to see all the future carriers of his charism in all those countries. And I, as an old dreamer, still have a burning dream to link Guanellians from Nazareth to the old roots of our Faith! But how? By reversing the ancient journey of the three Magi from the cradle of Jesus, to the cradle of Christianity. Patriarch Gregory III could be a real bridge for a Guanellian shelter of charity on the border to Syria, in the green Beka Valley, where we both still have contacts in the city of Zahle, who could contribute to making this dream a reality. From there the path of Fr. Guanella into the Emirates is not far, because in 2009 our General Council received a formal invitation to establish a fully financed disabled center from the Apostolic Vicariate Msgr. Paul Hinder validated by a factive promise from Sheik Faris el Marzroui, Cousin of the Ruler, Sultan Mohammed Al Zayed, at Abu Dhabi.
May God grant the entire Guanellian family His privileged grace. At the beginning of Lent we wish all our readers a fruitful and blessed spiritual journey.

After 50 years of carrying the torch of the Guanellian charism in silence for the German Diaspora, it gives me great joy to announce the fulfillment of an age old dream. Just before the first anniversary of the Canonization of Saint Louis Guanella, our long attempt to bring his sons to this promising vineyard has been approved. My circle of life will now be complete through Divine Providence, as everything has happened as foreseen. Our vicar Bishop, Monsignor Rainer Klug, wished to discuss the details of the arrival of two Guanellian confreres at the end of 2013 with a delegate of Father General Alfonso Crippa. As agreed, on October 16th I joined acting provincial Fr. Luigi and Fr. Tobia Bassanelli, the general delegate of Italian missions in Germany, at the bishop’s office in Freiburg. Mons. Klug welcomed the Guanellians to his Archdiocese and thanked Fr. Alfonso for keeping his word to send two priests of our congregation as soon as possible to Germany. After stating the conditions of the physical presence of Guanellian religious on German soil, he urged the two candidates to visit in January 2013, to participate in a German language study program on the Telekolleg, and prepare for a six-month immersion in our language within the archdiocese. An interesting fact is that two former pupils of the St. Calogero Seminary at Naro/Sicily will be the carriers of the Guanellian spirit to Germany. I for the past 50 years now, along with one of the other two priests who will be joining us, are also natives of our faraway, generous island. Now Fr. Guanella will definitively have put not one, but both feet in a new geographic area of activity. It was a memorable day not only for our Procure but also for the entire Guanellian family.

The following day, I took Fr. Luigi to the Catholic hospital of the Daughters of St. Josef at Pforzheim, who with their sisters at the Abbey of St. Trudpert in the Black Forest, have been the real precursors of this success, because they have been promoting the Pious Union since January 10, 1920! We also visited Deacon Ihle in the Deaconate of Pforzheim and had a short talk with Prior Theis of the Knights of St. Lazarus nearby in our district capital. These emotional days closed with a simple ceremony at St. Alexander Church in Tiefenbornn where Fr. Lugi celebrated a Mass in Italian with German translation, and two new Italian brothers took our habit. Ignazio Minotta and Enzo Urso of the Italian Cultural Club will become supporters of our Guanellian Mission. I’ll propose to dedicate the same to Divine Providence or simply the Don Guanella Mission in Deutschland. There will be a lot of work to do when our confreres arrive, but we are all confident that our Lord has already chosen the right paths, solutions and partners. Yes, now the long journey from Sicily to Germany comes to an end, and the circle of life makes sense! Magnificat anima mea Dominun! Praise the Lord my soul for all his gifts! 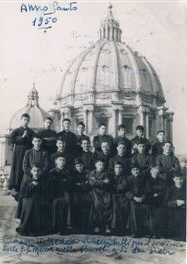 Germany – It was not quite time for our vacation so we kept our staff and cooperators busy by packing and loading relief goods which, in cooperation with the Lazarus Order, are being shipped to Romania.  Some of them are designated for the Guanellian sisters in Jasi and Scheia, Romania. During the annual vacation we invited our cooperators  to our regional garden show which this year was held in the charming little city of Nagold in the Black Forest, Folk music, cold beer and blonde ladies in traditional costume were the highlights for our German and Italian friends; we ended the day with a pizza dinner.

This year we assisted with the celebration of the Assumption of the Blessed Virgin Mary. With the German ladies of our parish, we collected herbs in the neighboring fields and gardens and made fresh flower bouquets. More than 100 bouquets were placed before the beautiful altar in Saint Magdalena  Basilica, the mother Church of the Guanellian Procura and of the St. Lazarus Knights. In the near future we’ll celebrate our meetings and religious festivities. Although it is not a civil holiday, for the Catholic population of our district, it is a great event. The flower bouquets were offered to those present. Small donations were collected for the Baby Hospital of Bethlehem, proof that after 2000 years no Catholic believer forgets the Holy Child, son of the Blessed Virgin on the annual feast of her Assumption into Heaven. This ceremony brought me back to November 1, 1950 when, as a young seminarian in Rome, I attended the proclamation of this important Dogma by Pope Pius XII. At that time at least fifteen Guanellian seminarians were serving Mass in Saint Peter‘s Basilica;  we stood behind the Baldachin of the Pontiff in front of more than 150,000 pilgrims from around the world. Just 5 years after the end of World War II.What an opportunity! I still thank the Lord and his  Beloved Mother for having granted me such a privilege!

Since the world  cannot be changed simply with empty words after the Assumption Mass, the cooperators gathered to discuss the so called “Don Mimi Testament.” He wrote to the German Procura just fifteen days before he died revealing his deepest wish: starting a project for children of lepers in Mindanao, Philippines. The project will be submitted on October 12th to Kinder Mission at Aachen, who made many donations to Guanellian projects in Legapzi and Mexico City in 2011.

May Mary of Nazareth cover all our benefactors, cooperators  and  supporters  under her protective mantle during this blessed and relaxing time.