Cuddalore – The patronal Feast of St. Joseph’s Minor Seminary was celebrated on March 19th with a car procession and Holy Mass. The confreres and seminarians prepared themselves spiritually with TRIDUUM; meditating on the many virtues of St. Joseph. Many religious near our Seminary, parishioners of Sagaya Matha Parish and students from the Boys Home attended. Holy Mass was celebrated by Fr. Visuwasam, and a fellowship meal was shared by all. 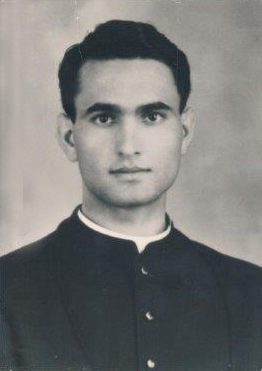 – Germany – I believe that the unexpected change in our papacy has magnetized not only Christians worldwide, but also Hindus, Buddists and even Muslims. I have experienced this spiritual suspense and magic spirituality through the many wishes I’ve received from my former business partners in all of those countries. During the endless media reports, I could have fallen into a trance, because the steps of my unique Guanellian period were projected on the white screen of time. I was aware of the process for having undertaken this journey with many holy confreres under the guidance of eight popes.

Baptized in 1936 under Pius XI, I undertook my seminarian journey under Pius XII, and for a Holy Year, I was an altar boy at St. Peter’s Basilica. On Nov.1st, I assisted the pope very closely during the proclamation of the Dogma for Assumption of the Blessed Virgin Mary into Heaven. I was a novice then, and in 1955 I made my first profession. During my philosophy studies, I met the former Cardinal Montini several times. Before the death of Pius XII, I was selected as an assistant in 1958 at our minor seminary in Anzano/Como. Montini became Pope Paul VI in 1963.

During one of his pastoral visits to the parish of Angera, Italy between 1954-57, I was introduced to him as Our first flower from Sicily. He looked at me with paternal and scrutinizing eyes, and told me You could become a good priest! Was he really wrong? But God had other plans for me. I remembered his words on December 9,1960 when I left Barza in civilian clothes and my dream remained hanging on the gate of Guanella House; the cradle and anchor for many of us during that period.

Later one my classmates and best friends, Fr. Dominic Frantellizzi, brought me back to my Guanellian roots. This conversion was for me a little Damascus path. After all of those experiences I had the chance to visit Latin America many times between 1972-2003, from Mexico to Patagonia. And each time searching for my mentors, who one after the other, demanded to be sent to South America. Frs. Fontana, Frontini, Bordoni, Della Morte, Zanella, Ostinelli, Chinaglia, Pizzuto, Terzaghi, Maffioli and many others, were always on my travel schedule every time I visited customers there. This gave me the opportunity to witness terrible poverty existing alongside incredible wealth. The impact was so massive that I made up my mind to invest the rest of my life contributing to programs in the Americas, Africa, the Arabic World and Asia for reducing poverty, abandonment and illness.

Argentina was my favorite country not only because more then 20 million people have Italian roots there, but also because I found my ideal habitat there. From 1976 on, I was frequently in Buenos Aires and visited our confreres often in the principle community of St. Joseph Church.

Now you ask, what has all this to do with Pope Francis? Very much I would say, because our structure in Avenida Castro was under the jurisdiction of the bishop’s office. Flores is one of the three ecclesial districts of Buenos Aires, and Bishop Jorge had been the auxiliary bishop there since 1992. Therefore he visited our parish, boarding school and disabled center on many occasions. I never met him personally, but after his election as Pope Francis on March 13, 2013, I immediately questioned some of my contacts in Argentina, Rome and Northen Italy where my former pupils and philosophy classmates still provide the continuity of the Guanellian charism among our assisted patrons. So in a short time I gathered both witnesses and pictures. I’ll try to create a small mosaic using the short stories I learned from many long time friends of Bishop Jorge Mario Bergoglio, who was a very closed friend of the Guanellians in Argentina, Chile and Brazil.

My former pupil, Fr. Angelo Gottardi, spent many decades in South America, mostly in Argentina, where he had been a National Delegate for some time. He and Fr. Silvio Sperotto, a long time former vicar priest at St. Joseph Church, served under the rule of H.E Bergoglio. Bishop Jorge used to arrive on the colectivo bus at the parish where he often consumed very frugal meals with our disabled or elderly residents. Often he also helped to feed them. He always refused ostentatious or ornamental clothes, and he never carried a golden cross. Even since his election to the papacy he wears only a simple iron Cross as his pectoral. Fr Silvio was often surprised at how tender Bishop Bergoglio was in dealing with the poor of his parish and with our disabled. I also believe that most of the contents of his homily during his official introduction on March 19, 2013 had clearly shown many aspects of the Guanellian charism that he would have absorbed during his long guidance of the Diocese of Flores/Buenos Aires, and his frequent contacts with many of our confreres at St Joseph Parish, Tapiales Seminary and our elderly home. These were some of his main points:

It was not purely that he wished to start his mission as Pope on St. Joseph’s feast day because he firmly believed in St. Louis Guanella as the Patron of our congregations.  It was because he, like John Paul II desired to draw our attention to the figure of the Holy Patriarch of the whole Church and silent cooperator of the divine plan of the redemption of Humanity.

I am firmly convinced that Pope Francis is a great gift for the Catholic Church and for our Congregation. We pray that God, through the intercession of Holy Mary and Saint Joseph, finds the force and perseverance to reform our Church and bring her to believers. Opening the moldy rooms, the encrusted windows, and demolishing useless gates and prohibitions! What we need is a Church where fresh air can circulate and permit everyone to breathe the presence of God.

My firm desire now is to organize a pilgrimage from Germany to the Vatican and apply for a general audience with Pope Francis for our cosmopolitan community in the MCI of Pforzheim where Germans share faith, love of God, and fraternity with Italians, Romanians and….many Argentinians who almost three decades ago, came to our Region to find work and friends. This would finally conclude the circle of my life in the shadow of the Papacy. If I ever have the chance to meet Pope Francis, I will still have just one regret. That I could not meet Pope Pius XI because I was too young, and Pope John Paul I, because his pontificate was mysteriously interrupted during one of my visits to Uruguay and Argentina in 1978.

Sometimes I think back to the unforgettable moments of my twelve months of service as an altar boy in the center of Christianity; Saint Peter’s Church, which was somehow my cradle. After my brief silence, I would like to use the media window of our Divine Providence Province to wish everyone a grace filled rest from our present Lent. Let us open our hearts and prepare our souls to sing at the Easter Saturday Resurrection! Christ our Redeemer arose from his horrifying death on the Cross because the mercy of God is infinite! Misericordia Domini infinita est!

Koppaka– The Vatluru community celebrated the feast of our Founder St. Louis Guanella for the first time at Guanella Bhavan, the Minor Seminary in Andhra Pradesh.  The festive Holy mass was celebrated by Most Rev. Mathew Cheriankunnel, PIME.  The first anniversary of the canonization of our founder was a landmark in the history of the local.  Priests and women religious from in and around the city of Eluru attended, and the Legion of Mary from the parish took a leading role in the Feast.  The most special guests were the children of Guanella Oratory.  About 500 people participated in the Holy Eucharist and received the blessing of St. Guanella on the gracious occasion.  After the Holy Mass the young, energetic seminarians portrayed the life St. Guanella through a 40 minute skit.  Everyone enjoyed learning about his life in that art form.  A festive meal was served to end the joyful, educational celebration.

“The Good Beginning is Half Done”

Saigon – September marked the beginning of a new academic year. It was decided to start the year with prayer, so a trip was taken to the Benedictine Monastery where Rev. Fr. Antony Quyen, SVD, rector of the minor seminary of SVD, preached a two-day recollection to the aspirants. He started with the question, ‘why do I want to become a religious?’ He also placed many good examples and practical issues of religious life to the students. He insisted that religious people are not saints, but they walk towards holiness everyday by being faithful to their call and the mission entrusted to them. He also said, ‘A priest is a person who guides the people, leads them to God, and gives meaning to the word of God through his words and deeds’. After spending two days on the mountain in prayer, everyone returned home ready to start afresh a new life with Christ.

Cuddalore – On June 24th Sagaya Matha Church celebrated Corpus Christi beginning with Eucharistic Adoration. Rev. Fr. Lourduraj SdC spoke about the relationship that various saints had with the Holy Eucharist. A Eucharistic Procession formed at the Church and proceeded to the College Hostel run by the Guanellian Sisters; the reflection by Rev. Yesudhasan, the Rector of the diocesan Seminary, implored participants to be living and moving Eucharistic people. The next stop was St. Joseph’s Minor Seminary. The Eucharistic Lord was solemnly received by formators and students. Rev. Fr. Lourdu Samy, a senior diocesan priest, taught that the Divine Lord present in the Eucharist is continually waiting for us; we need only to approach him. The entire Cuddalore community went away with many blessings. 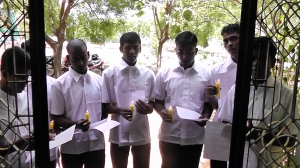 Sivagangai – A solemn Eucharistic celebration welcoming seven brothers (three from Andhra Pradesh and four from Tamilnadu) into postulancy took place on the Feast of the Sacred Heart of Jesus, June 15th in the Yesuvanam community. Fr. Soosai Rathinam, Vice Provincial, Fr. Paul Arockiaraj, Rector of the Minor Seminary in Cuddalore, and Fr. Thomas, the Spiritual Director, were the celebrants. During the Homily Fr. Soosai addressed the Postulants insisting that they learn to be meek and humble like Jesus and encouraging them to grow in spiritual, charismatic and human qualities. After the homily, Fr. Soosai presented each postulant with a Holy Cross as a sign of official entrance into postulancy. The celebration ended with a fellowship meal.