Our Lady of Hope Delegation 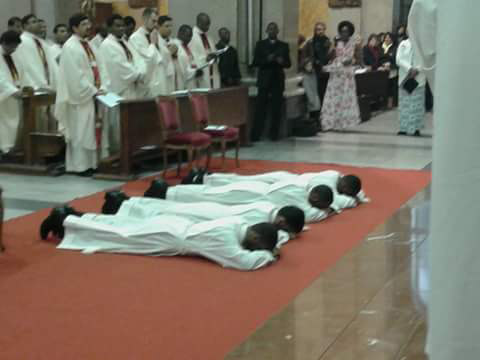 The doors of the Church are wide open as Pope Francis notes, “God never ceases to demonstrate the richness of His mercy over the course of centuries.” This year has richness of grace in the Church as well as well as in the congregation; in this moment four theologians were ordained as deacons on March 6th in the Basilica of St. Joseph Trionfale, Rome.

‘Deacon’ stands for διάκονος which means minister or servant. The ministry of deacon is the vocation to serve in 3 areas; the Word, Liturgy and Charity. The four deacons, who were perpetually professed October 24th in Como, were happy to receive the ordination of diaconate during Holy Mass presided by Mons. Enrico dal Covolo, SdB. The deacons to be ordained were Eustace, Oscar, Marc and Selvakani belonging to the Delegation of Our Lady of Hope and Divine Providence Province. The parents, relatives and friends of deacons arrived from various parts of Italy and there were almost 70 priests around the altar to testify to the grace of the Lord for 4 young men of Christ.

The Gospel of the day was Luke 15,1-3, 11-32, the parable of the prodigal son, which interpreted by Mons. Enrico in such a way it remains a milestone for the Servants of Charity. He called them, “diaconi della misericordia,” Deacons of Mercy; saying that they are called to be the mercy servers to the emerging needs of the world.

He recalled three practical verbs indicated by Pope Francis during his special Audience to the Guanellian family on November 12th in Paul VI Hall, Vatican; namely to trust, to look and to hasten.

To trust: The parable of the prodigal son is a story of Father’s unlimited trust and Mercy. The father trusted the son and divided his property. At the center of St. Guanella’s life was the certainty that God is a merciful and provident Father. The two lines go hand in hand; the trust in God and trust in poor that are the prodigal sons and daughters in our Guanellian centers.

To look: The father “saw” his son. There is a great deal in that word, ‘saw.’ God has such a way of seeing men and women that you and I cannot understand. He sees right through us like He saw in the Gospel; Matthew, Zaccheus and a rich young man with a glance which sees our past, present and future.

When he was yet a great way off, He felt compassion for him and ran and embraced him and kissed him. St. Guanella had the same look of mercy in which these new deacons will ‘see’.

To hasten: In the ancient Jewish culture, it was difficult for the respected persons with dignity to come down and receive the young son back in to the family. Mons. Enrico echoed the living words of St. Guanella, “We cannot stop as long as there are poor to be assisted.” Dear loving deacons, Poverty cannot wait. Let us feel the compassion for the poor, and run, embrace and kiss. (v.20) Today is the special day because 4 young hearts receive the extraordinary grace to be called, ‘deacons of Mercy.’

Then he ordained the deacons, the holy mass ended with the Jubilee blessing along with prayers for Pope Francis. A sumptuous dinner and feast for the invitees was served in the Theological Seminary, Rome. Fr. Umberto Brugnoni, the Rector thanked the Lord for these new deacons to the Church and congregation.