Manila – A Valentine program was held at Guanella Center February 14th for persons with intellectual and developmental disabilities. The opening of the program was led by Sr. Fe Aguilar, a Guanella Center Staff, followed by an opening prayer led by the hearing impaired class of Sir Marvin Lava. The Guanella Home residents presented a dance number with the Physical Therapy interns and then the different booths were opened and the games were played. Lunch was served after the games followed by another dance number presented by another group of boys and girls. There was a contest to decide who would be awarded Mr. and Ms. Valentine 2017, the lucky ones were John Paul Dunglao and Hana Vanessa Almario, next were Maricar Marabillas and Marwin Ostras and last but not the least were David Torotoro and Fel Lorraine Canoy. The main theme for this year’s Valentine was “Anyone can catch your eye, but it takes someone special to catch your heart.” 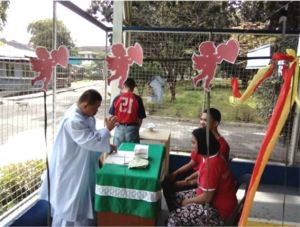